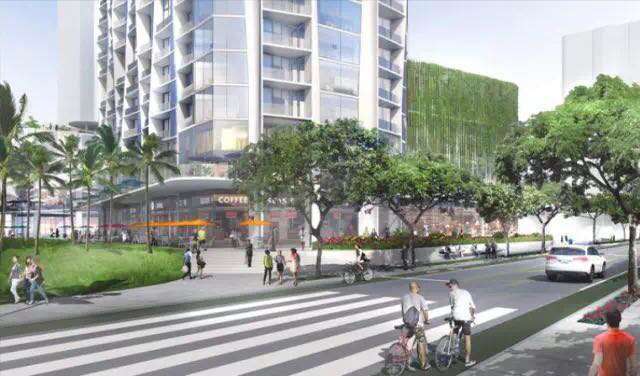 The Howard Hughes Corp. is taking a slightly different approach with sixth mixed-use tower in Honolulu, called Koula, by reserving all of the ground floor of the 570-unit tower for commercial space and moving the lobby and other residential services to the second floor.

The 41-story building is planned for a site next to the Ward Entertainment Center on Auahi Street, where a group of warehouse buildings were recently demolished. The tower will have a mauka-makai orientation, with the long side facing the Ward Village central plaza, a public park that will stretch from Queen Street to Ala Moana Boulevard.

Work on that park space is getting ready to start, and the first phase, which will include grass and landscaping, is expected to be complete by the end of the year. Sales of the 570 studio, one-, two- and three-bedroom units ranging from 300 square feet to 1,500 square feet at Koula are expected to start late this year or early 2019, assuming the developer completes the entitlement process; prices are not available yet. Construction could start in late 2019.

“Koula is a transformative next step for Ward Village” Simon Treacy, president of Hawaii at The Howard Hughes Corp. (NYSE: HHC). “It’s connection to the Central Plaza will activate the streetscape in a vibrant outdoor setting that is intended to foster social connection and public recreation in the heart of Honolulu.”

While the building conforms to the developer’s Ward Village master plan, the Howard Hughes Corp. is asking the Hawaii Community Development Corp., which oversees development in Kakaako, for a modification to allow the podium to be built 75 feet high, instead of the allowed 45 feet, said Todd Apo, vice president of community development. The HCDA has scheduled public hearings on the project for June 6 and June 13, with decision making scheduled for Aug. 1.

The developer did the same for its first five buildings — the completed Waiea and Anaha towers, the Aeo and Ke Kilohana towers under construction and the Aalii tower, which will start construction later this year behind the Koula site.

“It allows you to push the parking in and wrap the building with retail,” Apo said. “From a community standpoint, it makes a lot of sense.”

The entire first floor will be leased to retail and restaurants, as well as part of the second floor. The building is also being designed with a public porte cochere that opens to a courtyard and entrance to the central plaza, where people visiting the park, shops or restaurants may get dropped off. “More of a drop-off experience than a parking experience,” Apo said.

Race Randle, senior vice president of development at Howard Hughes, said the initial phase of the central plaza will involve planting grass “that can handle a lot of use” and other landscaping.

“It really starts to activate the heart of the neighborhood,” he said. Eventually, the developer will wrap buildings around all sides of the public park area.

The new building will have no public parking, but it is adjacent to the Whole Foods Market-anchored Aeo, where public parking spaces are already open.

Meanwhile, the Whole Foods Market is preparing to open its 72,00-square-foot flagship store at Aeo next week, on May 9.